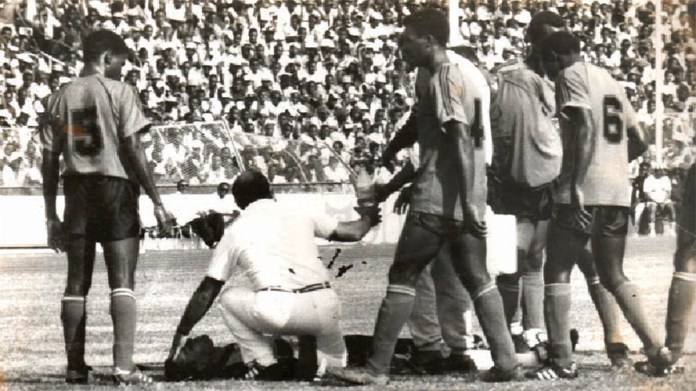 Growing up in Ghana, the story of Ghana vs. India in a friendly match was unavoidable for any young person.

The game, which has yet to be documented or played in a known year or stadium, has become a legend; many believe it took place in India’s Mumbai city.

The team’s description would lead one to believe it was the 1963 Black Stars squad. The team that won the Africa Cup of Nations for the first time in Accra.

The Black Stars team of 1963 had incredible stars who were not only dominant but also invincible. When the African champions met in a friendly game in Accra, not even the legendary Alfredo di Stefano and Ferenc Puskás’ Real Madrid side could beat them.

Edward Aggrey-Finn, Edward Acquah, Osei Kofi, Ben Acheampong, Emmanuel Oblitey, and Wilberforce Mfume were among the players on the 1963 team (the striker who tore nets).

Mfum of Ghana was so raucous and muscular that he tore the net open in the first game of the tournament against Tunisia. Despite the dispute, the ball did actually tear the net.

The Black Stars of Ghana were the unquestioned kings of Africa, with a variety of talents.

The invitation – How the match was set up

We were told that in December 1962, after China had undeniably defeated India in the Sino-Indian War, six nations convened in Sri Lanka to explore how to permanently resolve the residual enmity between the two countries; Ghana was one of the participants.

Those present, however, failed to condemn China’s wrongdoings unequivocally. Jawaharlal Nehru, India’s prime minister at the time, was furious.

He [Nehru] took Kwame Nkrumah aside after the summit and told him what Mao Zedong, the then-governor of the People’s Republic of China, had said: “The route to world conquest lies through Havana, Accra, and Calcutta.” This made Nkrumah anxious, so he sought alliances for protection, despite Chairman Mao’s declaration of peace with Ghana.

Nkrumah received a letter from Nehru shortly after arriving in Accra, requiring him [Nkrumah] to officially criticize Mao Zedong’s conduct.

Doctor Nkrumah, whose ambition was to bring all nations together in peace and friendship, answered with nice and pleasant words but flatly refused to grant the prime minister’s request.

Nehru was enraged by this decision. But, having just lost over 3,000 soldiers in the Sino-Japanese conflict, he was hesitant to go to war with Ghana as well.

So, in an attempt to exact vengeance on the country, he wrote a second letter, this time asking that India and Ghana play a friendly international football match.

In February 1963, an Indian delegation arrived in Accra three days later and was immediately led to the President’s office. They presented Nkrumah with a formal proposal that he must sign in order to accept the match.

The suggestion was brought to the attention of the President’s Director of Sports, Ohene Djan, who urged that it be rejected since the team would be too preoccupied with preparations for the 1963 Cup of Nations. After then, an Indian official stated that Ghana would be considered the winner even if they only scored one goal.

Nkrumah was wary of this assertion, so he sought to be dismissed. The Indians threatened him with famine if he didn’t sign before he went.

Nkrumah dashed straight to see Kankan Nyame (a goddess he had imported from Guinea a decade before) to inquire about the situation. Ghana will embrace the accord, she declared. That wasn’t all, though. A tremendous famine would befall the entire country if Nkrumah failed to put his name on paper by 12 o’clock midday that day, according to the female deity.

This prediction infuriated Nkrumah, who dashed back to where the Indian envoys were waiting. The time was already past noon—at 12:01 PM—when he arrived and gazed at the golden wall clock he had received as a gift from Egypt. That is why, exactly 20 years later, in 1983, Ghana had a famine, just as the Indians had threatened. On February 29, the friendly was rescheduled.

Matchday and tale that will never be forgotten

Ghana’s team travelled to India to play India as part of their preparations for the African Cup, not only for practice and pride, but also to save the country from famine.

The team spent two days in the presidential villa before the scheduled match.

As the Black Stars took the field to face the Indian National Team, the Mumbai National Stadium was packed to the rafters.

People had to sit on top of one other’s heads since the stadium was so crowded. The excitement and anticipation for the game exceeded everyone’s expectations. Approximately 100,000 people packed the stadium in anticipation of the game.

Cameras, on the other hand, were not permitted inside the stadium. In reality, those who were able to sneak in their cameras discovered that they didn’t operate when oriented toward the pitch, but they were able to capture photographs when they turned it away from the field.

No one was able to catch the match as a result of this. Officially, no journalist was allowed to cover the game. This explains why there is no video of the match available.

The Ghanaian team was prepared, but their opponents were not on the field. As a result, the team manager approached the match commissioner, who led him to the match referee as well.

He told him to return to his boys and tell them to be ready. He took an alcohol bottle from his pocket after instructing him, swallowed it down, and then proceeded to the pitch’s centre circle.

The Indian team emerged out the little bottle one by one, just as the bottle was perfectly set. Much to the delight of their supporters and the surprise of their opponents.

Ghana lost the coin toss before the game, forcing them to pass the ball first. The ball suddenly became so heavy that none of the Ghanaian players could even roll or kick it.

The referee then requested that the Indians receive the opening pass so that the game could begin. Everyone was in agreement.

As a result, the Indian captain approached the ball. When the referee blew his whistle, he booted the ball so hard towards the Ghanaian goal that it scored, much to the dismay of the visiting team. The goalkeeper for the Black Stars was now lacing his “kamboo.” The initial strike resulted in the first goal.

This will start a demolition that will have the stadium howling every second of the game. In Mumbai, Ghana was expected to score goals.

The ball moved this time to restart the game. Ghana’s skill, deception, and glimpses of why they were the team to beat were all on display. The ball immediately moved to the sides. Mfum received a ball, sprinted to the sides, and delivered a beautiful cross to Baba Yara, who was waiting inside the penalty box.

Just as Baba Yara was about to soar into the air to head the ball home, he noticed that the Indian goalkeeper had transformed into a terrifying masquerade “kaakaamotobi.”

Not only that, but he also discovered the goal frame was missing. It is no longer there. He jumped, a tenacious striker, only to see the ball transform into a large cooking pot known as “dadesen.” Fear overtook him, and he collapsed and passed out.

Following his loss of control, the Indian goalkeeper fired another long shot towards Ghana’s goal. Ali Jaara was alert to make a save this time. When the ball got close enough to his box, it divided into ten pieces, each of which contained a raging fire.

The tenacious goalkeeper caught one of the balls and was badly burned on his palms; much to his dismay, he had caught the wrong ball. India wins 2-0.

The Black Stars players were dissatisfied and hurt as a result of the Indian goalkeeper’s scary mask, a disappearing net, and the ball changing shapes from cooking pots to roofing sheets to boulders and fearful lions.

Every shot was successful, much to the pleasure of the Blue Tigers’ fans. The total number of people is 99. Each goal-scoring attempt was either divided into multiple pieces or turned into a ball of fire.

Ghana had a chance at the 90-minute mark.

Osei Kofi dribbled his way past an Indian defence that had morphed into a swarm of snakes and scorpions, but the Ghanaian international did so with ease.

He was hauled down by Indian fullback Singh Suresh just as he was about to fire a strike.

Wilberforce Mfum chose to take the penalty himself.

He was designed for these times, for history, and most importantly, for structure.

Mfum carefully positioned the ball and chose his location. At this moment, the ball transformed into a very huge cooking pot known as “dadesen.”

Wilberforce Mfum gained speed as if he were aviation about to take off, made big steps, and struck the ball with all his might and strength. The ball sped past the Indian goalkeeper, who had been “kaakaamotobi” throughout the game in Ghana’s Akan dialect.

Ghana had scored the game-winner! Furthermore, the goal net was totally torn apart because of the magnitude of the “dadesen” mixed with the speed with which it was travelling.

As a result, the Ghanaian people coined the phrase “Mfum atete net nu,” which means “Mfum has torn the net.” Ghana had triumphed!

The team landed in Ghana in bad shape, with many members injured. They did, however, arrive as heroes. They were each given a house, as well as a car and a wife.

Next post First female US secretary of state, Madeleine Albright dies at 84