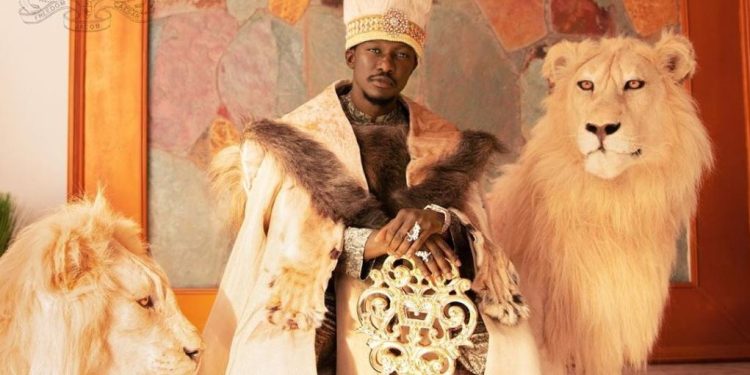 The presence of two tigers in Freedom Jacob Caesar’s Wonder World Estates, Avenue Lincoln, near the British High Commission at Ridge in Accra, has alarmed some locals.

The estate is thought to be owned by business mogul Nana Kwame Bediako, also known as Freedom Jacob Caesar.

Residents claim that the presence of tigers in the neighbourhood makes them feel unsafe.

According to Daily Guide sources, locals’ attempts to persuade the facility’s owner or administration to remove the tigers have been ineffective, as their complaints are frequently received with aggressive answers.

“The animals stink,” according to several residents.

Those animals are kept in apartments with no access to natural light or fresh air. One homeowner claimed, “a very foul scent emanates from them as soon as the door is opened.”

“They are opened early in the morning and then sent inside around 10 a.m.,” another resident added. They urinate and defecate on the floor. They also produce noise, which keeps us awake at night. “

“Neither tranquillizers nor sufficient training is available.” No one knows what would happen to us in the event of an unpleasant situation,” bemoaned another.

According to the inhabitants, the animals have been present since November of last year, when they were cubs, and they had hoped that the animals would be transported to an appropriate institution after a short length of time, but that was not to be.

“Having wild animals, particularly tigers, in an estate in the middle of the city where there is less than a metre between the buildings and also without any adequate training and care [for them],” they grumbled.

They further said that instead of attempting to persuade the owner to remove the animals, he erected a building for them just next to their apartment.

“When we saw them erecting [the structure], we inquired as to whatever institution had given them permission to erect such a structure for animals in a residential area.”

One of the tigers is said to have once threatened a resident (male) who had to flee for his life.

Another resident is said to have suffered injuries as a result of an interaction with one of the tigers, including bruises on her feet.

Residents also stated that they reported the situation to the Ghana Wildlife Society approximately a week ago and that they were told that the matter would be investigated, but that no good response has been received since.

Residents stated that no official from the organisation had come to tell them anything, but that they had seen some officials from the Society in the estate on Sunday, May 15, 2022, in the presence of Nana Bediako, but “they did not tell us anything.”

“They keep throwing us whenever we call to ask out how far.” We’ve been told that the authorities had travelled extensively and back and forth.

“They don’t tell us anything, which is why we plan to report the incident to the police if we don’t hear from Wildlife Society after a while.”