The Vice-President, Dr. Mahamudu Bawumia, has called on the alumni of the Kwame Nkrumah University of Science and Technology (KNUST) to support the government’s development agenda of digitalisation, industrialisation and job creation.

He noted that the fourth industrial revolution “is upon us and we cannot afford to be excluded because there is growing empirical evidence that illustrates the capacity of digitalization to increase productivity, incomes and wealth creation”.

Addressing the 11th Global KNUST Biennial Alumni Congress in Accra yesterday virtually, Dr. Bawumia said he was convinced that the KNUST alumni had the requisite technical and professional expertise to help the country achieve its development goals.

He explained that such partnership with the government was critical to the sustainable growth of the economy.

He said the government was implementing a robust development agenda spanning digitalization, industrialization, road construction, health care, education, job creation, and many others, adding that “we now need to partner the KNUST alumni who are professionals in these areas and can bring their expertise to bear on the country’s development goals”.

He said it was for that reason that the government had integrated science and technology into many government initiatives with a declaration of a new commitment since 2017 to introduce technology and digitalization into agricultural activities such as land records and extension services, among others.

Dr. Bawumia paid glowing tributes to a number of professionals and the alumni of the university — including his wife, Mrs. Samira Bawumia; the Leader of the Majority Group in Parliament, Mr. Osei Kyei-Mensah-Bonsu; Senior Presidential Advisor, Mr. Yaw Osafo-Maafo; Minister of Education, Dr. Yaw Osei Adutwum; Minister of Works and Housing, Mr. Francis Asenso Boakye — for contributing in diverse ways to the various sectors of the economy.

The Vice-President also expressed the view that the history of KNUST was intricately linked to the history of Ghana because “this country was built in the labour and service of many KNUST alumni; we, therefore, owe you much gratitude for helping Ghana to reach where it is today”.

He commended KNUST for establishing the alumni, saying it was crucial in the development and many achievements of the university for the past 70 years.

The Vice-Chancellor of KNUST, Professor Rita Akosua Dickson, whose speech was read on her behalf virtually by the Pro-Vice-Chancellor, Prof. Ellis Owusu-Dabo, called for a national policy on Science, Technology, and Innovation.

She noted that the university had strategically positioned itself to utilise its human resources to partner government to ensure a successful implementation of such a policy.

The Director-General of the Ghana Standards Authority (GSA), Prof. Alex Dodoo, questioned whether the country’s investment in science and technology had so far yielded the desired results in terms of job creation.

He explained that it was time the government partnered institutions such as the KNUST and other relevant stakeholders to urgently drive the nation towards job creation because of the growing unemployment considered a security threat for the country.

“The youth are getting restless and if we don’t do anything about the situation, we will all suffer the consequences; so let’s move out of our comfort zone and start creating job opportunities for our youth,” Prof. Dodoo pointed out.

The Chairperson of the Local Organising Committee, Mrs. Cynthia Adare Bediako, observed that if “Ghana is to participate in the fourth industrial revolution, we have no choice than to support agents of change for development such as KNUST and devote substantial resources for this purpose in order to approach the current status of development equivalent to those in South East Asia.

The two-day event was christened: “KNUST @ 70, the Contributions of Alumni in Science, Technology, and Innovation for National Development”.

It brought together the KNUST alumni, both in-person and virtual, to discuss the achievements and challenges of the alumni over the past two years. 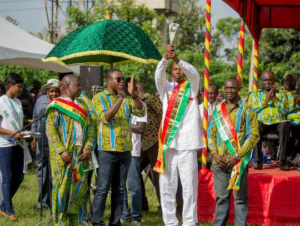 Next post Agriculture is a profitable enterprise, not punishment – Best Farmer