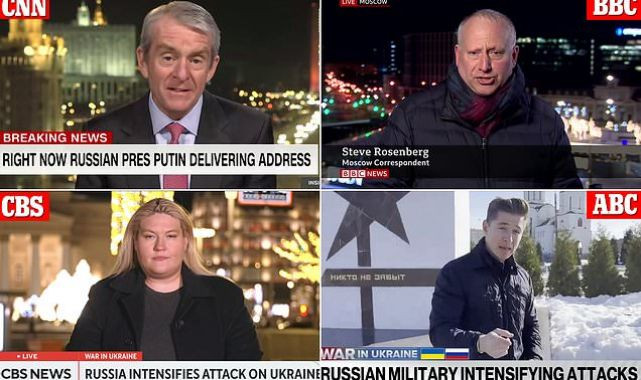 Some global media outlets have suspended their operations in Russia after President Vladimir Putin signed into law a new bill that punishes the spreading of “fake news” with jail terms of up to 15 years.

Following the development, CNN International, the global arm of CNN, ABC and CBS News has announced that it will stop broadcasting in Russia.

Bloomberg News, the BBC and Canada’s CBC also said they were temporarily suspending the work of their journalists inside Russia.

This is coming after some Russian officials claimed that false information has been spread by enemies such as the United States and its Western European allies in an attempt to sow discord among the Russian people.

Bloomberg’s Editor-in-Chief John Micklethwait said he greatly regretted the suspension. But “the change to the criminal code, which seems designed to turn any independent reporter into a criminal purely by association, makes it impossible to continue any semblance of normal journalism inside the country,” he said. “We will not do that to our reporters.”

“It leaves us no other option than to temporarily suspend the work of all BBC News journalists and their support staff within the Russian Federation while we assess the full implications of this unwelcome development,” he said in a statement.

He added that the BBC News Service in Russian would continue to operate from outside Russia. Jonathan Munro, an interim director of BBC News, said the corporation was not “pulling out” journalists from Moscow but assessing the new law’s effect.

The Washington Post, Dow Jones and the Reuters news agency said they were evaluating the new media law and the situation.

CBS News stated that it is no longer broadcasting from the country: ‘CBS News is not currently broadcasting from Russia as we monitor the circumstances for our team on the ground given the new media laws passed today.’

ABC News also announced suspension of its media operations in the country.  ‘Because of the new censorship law passed in Russia today, some Western networks including ABC News are not broadcasting from the country tonight. We will continue to assess the situation and determine what this means for the safety of our teams on the ground,’ the network said.

Russia has termed its actions in Ukraine a ‘special operation.’ The new law came after foreign ministry spokeswoman Maria Zakharova accused the BBC of playing a ‘determined role in undermining the Russian stability and security.’

Interim BBC News Director Jonathan Munro tweeted: ‘It’s with a heavy heart that we have had to suspend @BBCNews operations in Russia until we assess impact of new laws which outlaw independent journalism. Thoughts with colleagues in Moscow whose voices cannot be silenced for long.’

Deutsche Welle posted a letter to Russians on its German website saying it regretted the decision and urged readers to bypass the internet blockade.

Voice of America said in a statement that audiences in Russia deserved access to factual news content and it would continue to support tools that allow them to bypass any blocking efforts.

By ordering his forces into Ukraine, President Vladimir Putin has sparked the worst crisis between Russia and the West since the end of the Cold War, battering financial and commodity markets, sending the ruble into a tailspin and triggering an economic isolation never before visited on such a large economy.

Western governments and tech platforms have also banned the Russian news network RT, with the European Union accusing it of systematic disinformation over Russia’s invasion of Ukraine.