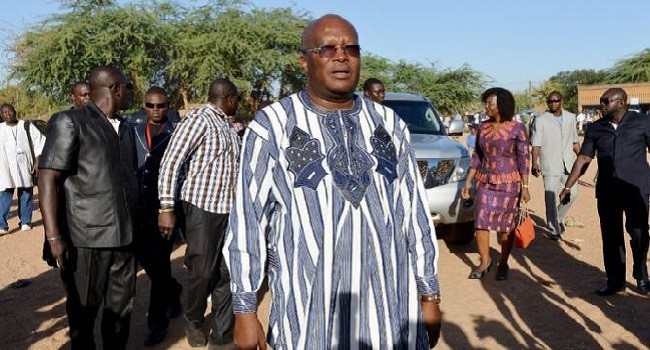 President Roch Kabore of Burkina Faso has been detained at a military camp by mutinous soldiers.

His detention was reported on Monday, January 24, a day after soldiers staged mutinies at several army barracks, raising fears of a coup in the conflict-torn country. Later that day, heavy gunfire could be heard near Kabore’s home in the capital, Ouagadougou.

According to reports, the soldiers have been asking for more help in their fight against Islamist militants.

According to Aljazeera, several bullet-riddled presidential fleet vehicles were seen near the President’s residence on Monday morning. One of them was splattered with blood. Overnight, residents in the president’s neighbourhood reported hearing a lot of gunfire.

Three armoured vehicles and soldiers wearing balaclavas were stationed outside the state broadcaster’s headquarters. On Monday, government sources could not be reached.

Kabore was detained at a military camp, according to two security sources and a West African diplomat, according to Reuters. The government, which denied a coup was taking place on Sunday, made no immediate comment.

According to the AFP news agency, the president was arrested along with other government officials. According to two security officials, “President Kabore, the head of parliament, and the ministers are effectively in the hands of the soldiers” at the Sangoule Lamizana barracks in the capital.

Two of the insurgent soldiers told The Associated Press over the phone early Monday that Kabore was being held “in a safe place,” but they wouldn’t say where.

Kabore has been the president of Burkina Faso since 2015, when a popular uprising deposed longtime strongman President Blaise Compaore, who had been in power for nearly three decades. Kabore was re-elected for a fifth five-year term in November 2020, but frustration has grown over his inability to stop the spread of violence across the country.

Attacks linked to al-Qaeda and the armed group ISIL (ISIS) are on the rise, killing thousands and displacing more than 1.5 million people. The military has suffered significant losses.

Angry mutinous soldiers claimed that the government was disconnected from its forces on the ground, that their colleagues were dying, and that they desired military rule. The soldiers called a man who said they were looking for better working conditions for Burkina Faso’s military.

Previous post Did Bobrisky show his balls in nude photo?