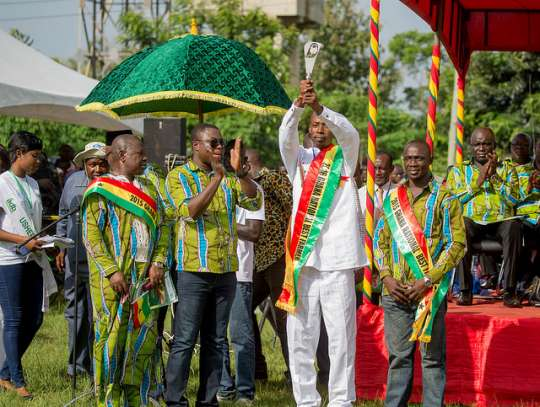 A 44-year-old Alhaji Mohammed Mashud from the Northern region has been crowned as the National Best Farmer for 2021.

The first runner-up, Suleman Yidana from the North East Region would receive a tractor and disc plow,  GH¢200,000 insurance cover, a study trip to Israel, and a sprayer.

The Best fisherman award went to Mr. Kweku Ehun of the Gomoa East District of the Central Region who received a two-bedroom house to be built at a location of his choice. Other regional award winners were also awarded.

This year’s celebrations were on the theme: “Planting for Food and Jobs-Consolidating Food Systems in Ghana was graced by the President of the Republic, Nana Addo Dankwa Akufo-Addo, and ministers state from the regions.

As early as 7 am, hundreds of people from all over the country thronged to the Adisadel College Park to join the celebrations.

The Park which from Monday, November 29 has been host to the Agricultural Fair and the various Regional Focus days saw much higher patronage as the celebrations were climaxed.

All 165 farmers and fishermen were awarded at the ceremony.

Alhaji Mashud said it was important that the government worked to accelerate efforts at mechanizing agriculture to make the sector more attractive for the youth.

Mr. Ehun called for stringent efforts at stopping all forms of illegalities in the sector to sustain the fisheries.

Next post Dr. Bawumia calls on KNUST alumni to support the development agenda