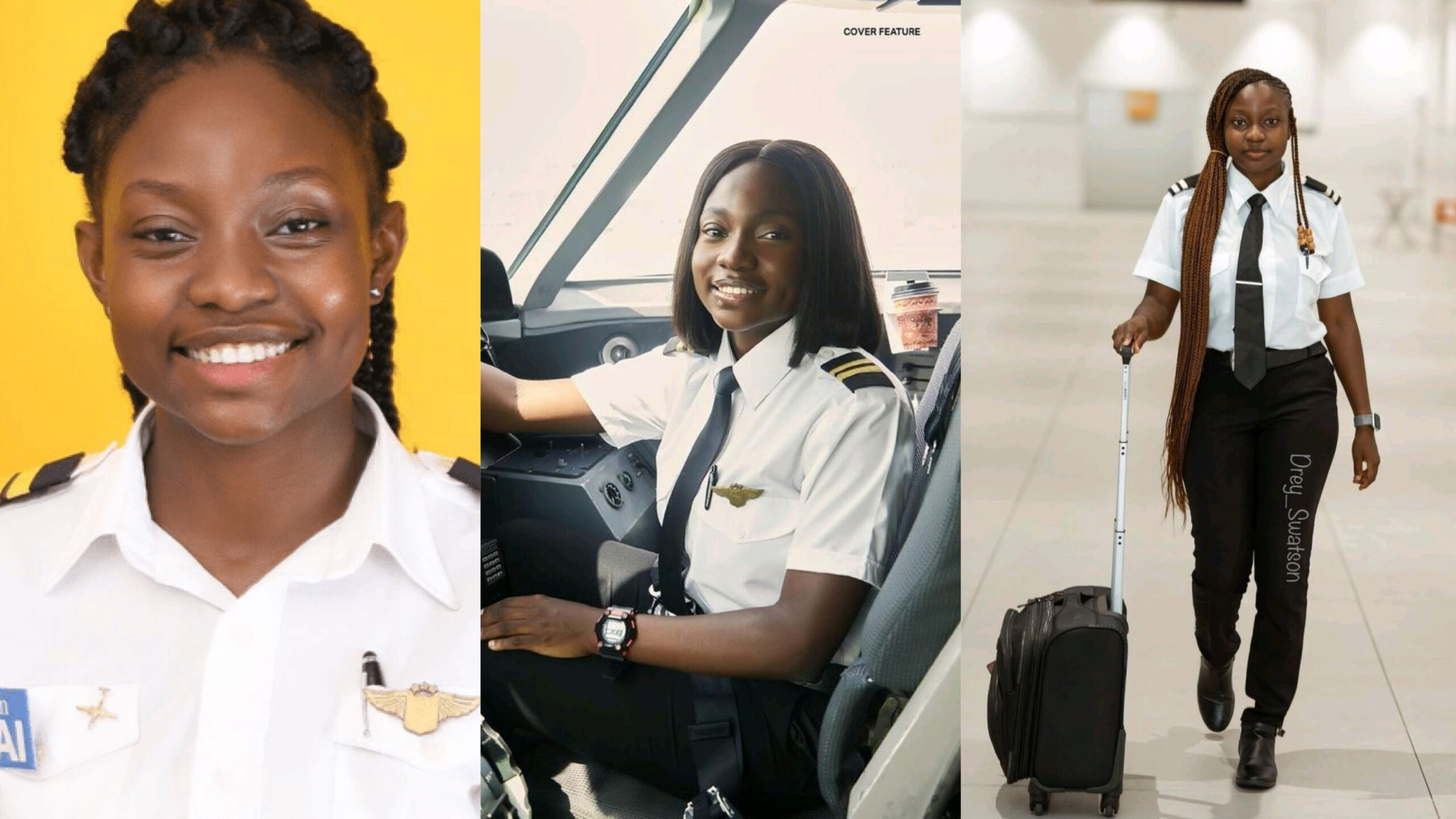 Born on February 23, 1997, Audrey had also had the dream of becoming a trained pilot. It became obvious in her love for Science, Technology, Engineering and Maths subjects.

Audrey flew 210 hours total from the time she was in school until she obtained her commercial license. She has also established an aviation company, Excel Aviation Company.

Audrey comes from a family of three siblings and strict but loving parents. She usually describes her parents as people who made sure their children were comfortable and well-mannered.

Road To Becoming A Pilot

Audrey Maami Esi Swatson has revealed that her dream of becoming a pilot had not been without setbacks and that she had to navigate some difficult terrain before reaching her goal. Most of the time, she felt like giving up.

Her experience as a female pilot had been completely normal, with no differences in the training process due to gender. Despite the fact that, as a woman, she usually had to work twice as hard as she studied because understanding does not come naturally to her to the level required of men.

Audrey Maami Esi Swatson’s experience as a female pilot had been completely normal, with no differences in the training process due to gender. Despite the fact that, as a woman, she usually had to work twice as hard as she studied because understanding does not come naturally to her to the level required of men.

During her training, she encountered numerous stumbling blocks as the examination became increasingly difficult. Audrey had to retake the exams five times despite passing them the first time.

According to Audrey Maami Esi Swatson, her worst nightmare was losing any of her parents, which was preferable to losing control of the yoke while aboard. She had already lost her beloved father, and she compared his death to be “amputated and losing an engine.”

Audrey Swatson’s incredible abilities could not be contained, and she was honoured by the Ministry of Aviation. She was also nominated and honoured for Young Person of the Year at the Future Awards Africa Prize (Ghana).

Audrey Swatson has altered the narrative because it is unusual to hear a woman’s voice as the pilot. Her story gives Africans more hope and inspiration.

Audrey Maami Esi Swatson opened up about her life in an interview:

“With the exception of God and my parents, I owe everything I am and hope to be to school.” I would not be able to move on to a more positive place in my life without the education I have received throughout my life, the friends I have met and networked with, and the great teachers who have been there for me since day one.

I would not have had the opportunity to become a pilot or to inspire other children that they can achieve whatever they set their minds to. Education has fulfilled me, and I am a happier person as a result.”

“My parents expected you to put forth your best effort in everything you do. Whether it’s school, sports, chores, playing, or church. When we played soccer, my only concern was a ball that got stuck underneath daddy’s car in the compound.”

“My father told me that if I changed my mind about flying, he would keep the money for himself.” So, together with my mother, they looked into how to enroll in flight schools. When I started training, I was just so excited to learn to fly and to be with other people who were equally enthusiastic.”

“In the end, you’d be judged on your pilot credentials.” Regardless of gender, all airlines are looking for someone who knows his or her job well. Knowing you’re a woman, the wind won’t blow easily up in the sky. Nature’s forces and aerodynamic laws do not operate in this manner.”

“It’s part of the training that most student pilots give up on ever becoming a pilot.” I used to think to myself during my training that, ha! Maybe it’s true that girls can’t do this.

After today’s lesson, I’ll call Daddy and tell him I’m giving up, with tears in my eyes and my gaze fixed on my side windows on the left.

‘I just see a blurry reflection of myself, and tears roll down my cheeks with a blink of the eyes.’ It was a difficult time, but I went back up there to fly and try again until I got it right and went solo.”

“In flying, I’ve discovered that once you get your hands on a challenge, something new appears; every time.” But my love of flying takes precedence. It’s always a pleasure to fly because I leave all my problems behind until I return.”

“My giant pine, daddy, died in March 2020, and it was the most heartbreaking day of my life.” I miss coming home to him and telling him about my flights. I’m afraid of not being able to fly at times.”

“Every time, God has something up there. Because I’m holding the plane, the view is the best part of the flight. “Every day is unique.”

Previous post Ghana Must Go: The Untold Story Behind the Mass Deportation of Ghanaians from Nigeria in February 1983