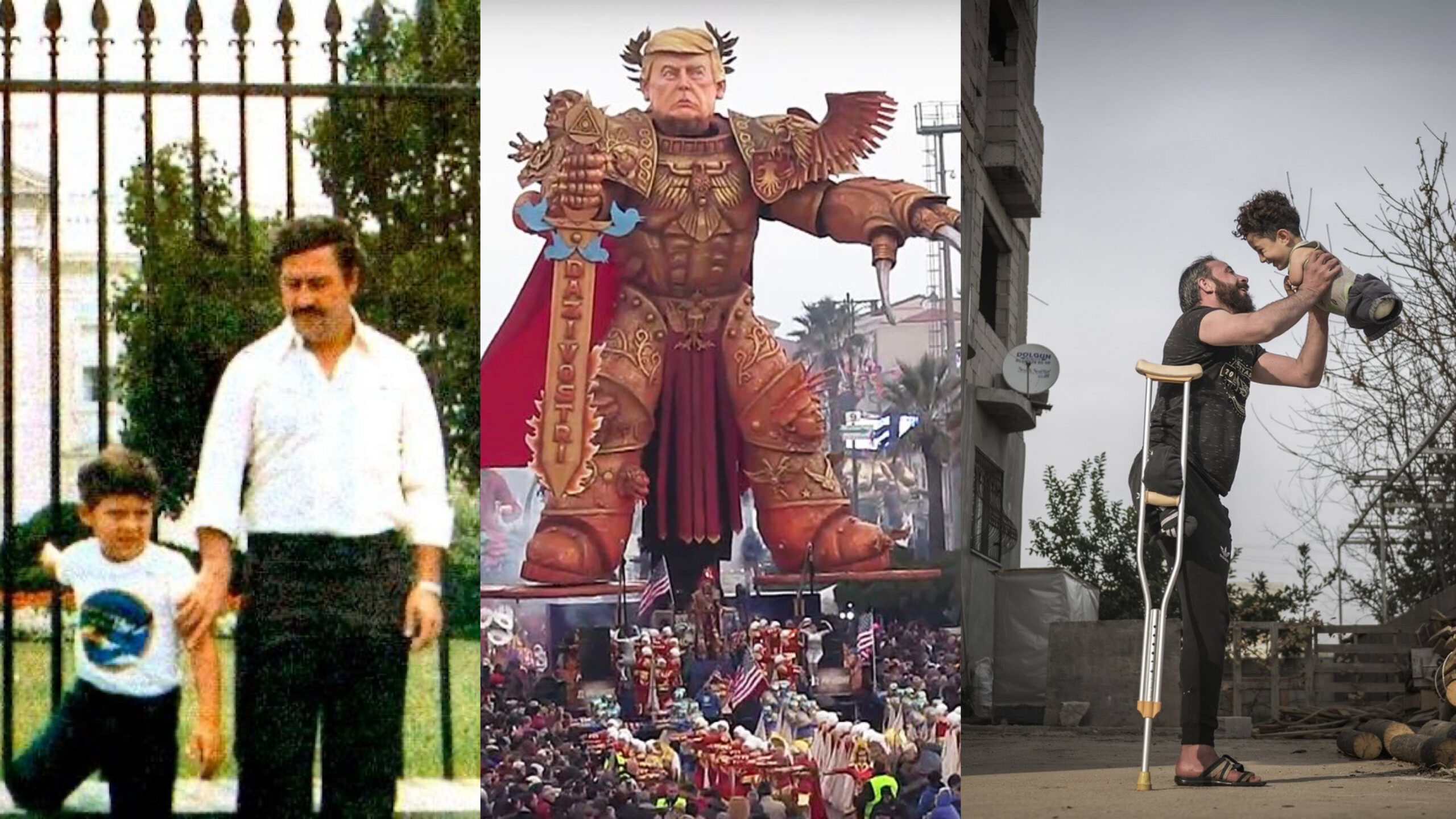 These are some of the rare historical photos in human history that give vivid descriptions of events that shaped civilization and became a focal point in our contemporary study.

These photos remind us of the strides made by others and the memories they created that are etched on the tablets of our hearts.

From Pablo Escobar to Charlie Cajplian, these iconic photos of past greats and events tell an undying story of classical history.

Now, these are some of the iconic photos in history.

While filming his first James Bond movie, DR. NO, Sean Connery autographs a coconut for a local Nassau girl (circa 1961).

In 1924, Frida Kahlo’s father, Guillermo Kahlo, captured these amazing images of his daughter disguised as a young man. Frida, the rebel is dressed in a three-piece suit and tie, with her hair slicked back, a focused and intent expression, and the stance of a young man about town.

3, Joe Masseria lays dead at Brooklyn restaurant with Ace of Spades in his hand, 1931

Joe the Boss, Giuseppe In New York City, Masseria was an early Italian-American Mafia boss. From 1922 through 1931, he was the boss of the Genovese crime family, one of the New York City Mafia’s Five Families. He fought in the Castellammarese War in 1930 to take control of the criminal underworld in New York City.

The looks of German POWs captured by Americans viewing a film about a concentration camp are depicted in this photograph owned by the United States Holocaust Memorial Museum.

Another shot of this scene was taken from the rear of the auditorium, but this time the photographer focused on the crowd to capture their reactions at the moment.

“Forced confrontation” brought Germans face-to-face with the worst works of the Third Reich as part of the Allied programme of postwar denazification, which aimed to rid Germany of the relics of Nazi authority and rebuild its civil society, infrastructure, and economy.

Military authorities from the United States and the United Kingdom altered their methods in response to local situations, resulting in a variety of confrontations.

During the Great Depression, millions of individuals in the United States were unemployed. Because they were unable to find another employment locally, many unemployed people took to the road, moving from place to place in the hopes of finding work.

Although a handful of these individuals possessed cars, the majority hitchhiked or “rode the rails.”

6, Jewish prisoners being liberated from a death train in 1945

As American forces advanced on April 26, 1945, there were 67,665 registered prisoners in Dachau and its subcamps, with more than half of them in the main camp. Political prisoners accounted for 43,350 of the total, while Jews accounted for 22,100, and the rest fell into various other groups.

The Germans began a death march from Dachau to Tegernsee, far to the south, on that day, forcibly transporting over 7,000 inmates, the majority of whom were Jews.

7, Christmas Dinner during the Great Depression

During the Great Depression, a typical Christmas Day routine included waking up, opening whatever presents were available, and then going to church. The men played cards, the kids merely played, and the ladies prepared — generally chicken — during Christmas dinner, either at home or at a relative’s house.

8, Elvis Presley in the Army

On March 24, 1958, Elvis Aron Presley enlisted in the United States Army in Memphis, Tennessee, and spent three days at the Fort Chaffee, Arkansas, Reception Station. On March 5, 1960, he left active duty at Fort Dix, New Jersey, and on March 23, 1964, he was discharged from the Army Reserve.

Mr Presley was a member of two separate armour battalions throughout his active military service. He served with Company A, 2d Medium Tank Battalion, 37th Armor, at Fort Hood, Texas, from March 28 to September 17, 1958. He received basic and advanced military training throughout this tenure.

Mr Presley was a member of the 1st Medium Tank Battalion, 32d Armor, and served in Germany from October 1, 1958, to March 2, 1960. He was assigned to Company D of the unit for the first five days of that period, and then to the battalion’s Headquarters Company at Friedberg.

Frank C. Weatherman, 29, a gun smuggler who was transported here after attempting to get out of the Anchorage jail twice, was the last prisoner to leave the island. After Alcatraz was closed in 1963, inmates were taken by guards aboard a boat to be transferred to another federal prison.

Every time a woman enters a pool, she may thank Annette Kellerman, an Australian swimmer, for the cool, refreshing sensation of water on her skin. Kellerman, also known as the “Diving Venus” and the “Australian Mermaid,” was one of the most well-known women of her era.

Kellerman built a name for himself as an athlete, actor, and vaudevillian. Her flawless physique and powerful underwater performing skills brought a lot of attention to her world-record-breaking sports achievements. Her most famous achievement is the development of the streamlined one-piece swimming costume for women, which is widely regarded as a liberating garment.

“There is nothing more liberating than swimming,” Kellerman famously said. With the waves, all of life’s chains are swept away.”

Her legs had made her famous as well: in 1905, the Australian swimmer held all of the world records for women’s swimming. She was a vaudeville performer who performed high dives and underwater dancing as part of her performance. She was dubbed “The Original Mermaid” in newspapers.

Annette Kellerman’s legs generated a stir when she came out onto Revere Beach in 1907 wearing a one-piece bathing suit that terminated in shorts above her knees. She was detained for indecency after the police were summoned.

Sir Charles Spencer Chaplin Jr. KBE was an English comedian, film director, and composer who rose to prominence during the silent film era. He is regarded as one of the most prominent people in the cinema industry because of his movie persona, the Tramp.

From his childhood in the Victorian era until a year before his death in 1977, his career spanned more than 75 years and was marked by both adoration and controversy.

Ducklings are providing medical treatment. It had to be delivered to her bedside. Because she is unable to walk. She is paralysed due to polio.

One of the hospital’s animal therapy approaches included cuddling with a towel-wrapped newborn duck.

“The Master-Drone” is the name of the Trump float, which was created by artist Fabrizio Galli, who has created similar sculptures mocking various politicians.

This month, a massive papier-mâché float depicting President Donald Trump made waves at one of Italy’s most famous Carnival festivities.

The sculpture, which depicts the president dressed as an emperor with cloak and sword, is on display during the Carnevale Di Viareggio event in Viareggio every year during Carnival, the pre-Lenten carnival season.

A tragic shot of a Syrian father with his baby boy born without upper or lower limbs has received the photo of the year at the Siena International Photo Awards (SIPA) 2021.

This image, named ‘Hardship of Life,’ was taken near the Syrian border in the region of Reyhanli in Hatay, Turkey, by Turkish photographer Mehmet Aslan.

Munzir, who lost his right leg after being hit by a bomb while walking through a bazaar in Idlib, Syria, is shown in the photo swinging his infant son Mustafa in the air.

On June 11, 1963, Thch Qung c, a Vietnamese Mahayana Buddhist monk, burned himself to death at a busy Saigon traffic intersection. Qung c was protesting the South Vietnamese government’s persecution of Buddhists, which was led by Ngô nh Dim, a devout Roman Catholic.

Photographs of his self-immolation went viral around the world, bringing attention to the Dim government’s practices. “No news picture in history has caused so much passion around the world like that one,” John F. Kennedy said of one snapshot.

For his photograph of the monk’s death, Malcolm Browne received a Pulitzer Prize.

During the battle for Iwo Jima on February 23, 1945, US Marines flew a flag atop Mount Suribachi. It was torn down, and a new flag was hoisted in its place. This second flag-raising was taken by Associated Press photographer Joe Rosenthal.

17, Pablo Escobar in front of the White House

We see the famed Colombian drug lord Pablo Escobar standing in front of the White House in Washington, DC, in this infamous shot. Escobar’s only son is standing alongside him. Around the same time, he took his family on a first-class excursion to Disneyland.

That’s the North Portico of the White House, and Escobar and his son are standing on the pavement adjacent to Pennsylvania Avenue, which was open to vehicular traffic at the time. Anyone could go down the street and pose for a shot like this, and you can still do so today, but the barrier has risen higher.

The shot was taken by Escobar’s wife, Maria Victoria, and was featured in the HBO documentary “Sins of My Father” in 2010, which depicts the narrative of the drug lord’s life through the eyes of his only son, Juan Pablo Escobar, who has since changed his name to Sebastian Marroquin.

Pablo Escobar was attempting to portray himself as a “legitimate” politician in Colombia at the time this photograph was taken. He served on the Medéllin City Council before becoming a replacement Congressman.

He had a diplomatic passport, which is most likely what he used to travel to the United States, though this has not been confirmed. Alternatively, he could have simply utilised phoney passports obtained through his political ties.

Previous post Promo: Buy an ultra-modern house and get a Mercedes Benz for free at Star Properties