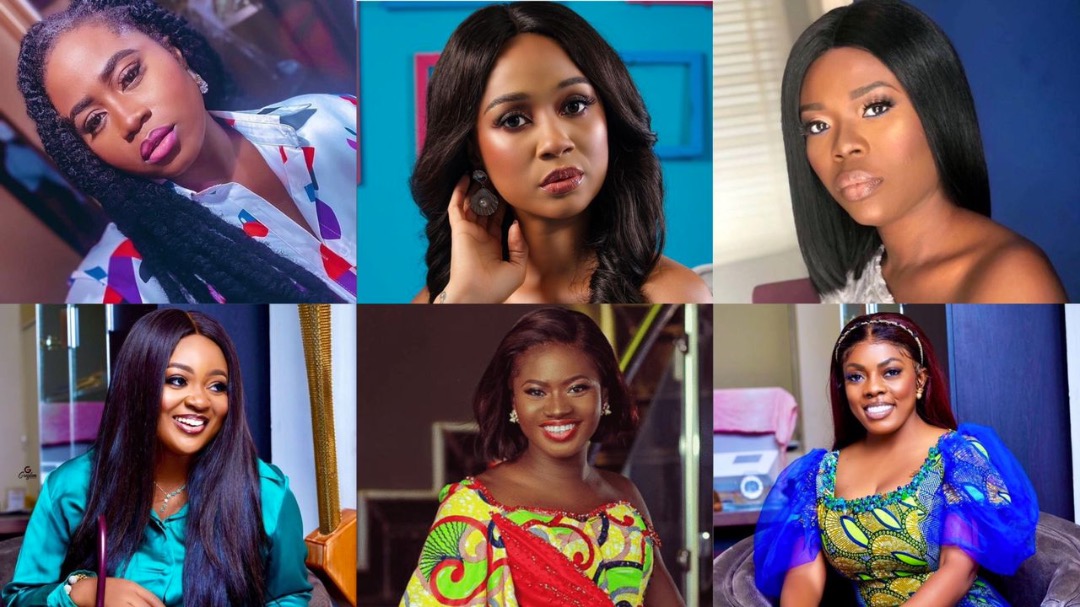 Marriage does not appear to be a top concern for several prominent Ghanaian female celebrities, which is probably something you are unaware of.

Despite the fact that society places high importance on women marrying when they reach marriageable age, these female superstars have yet to succumb to the pressure and rush into marriage.

Many people feel it’s because they’re successful and don’t see the need to submit to males, or they don’t like the notion of getting married and having to live with a guy for the rest of their lives.

To be honest, several of these Ghanaian female superstars have either had failed marriages or given birth to a child or children outside of marriage. Some of them are yet to see a man in their lives, while others have given us various theories about their relationships that have yet to be confirmed.

We’ve compiled a list of over 15 successful Ghanaian female celebrities who are still single and unmarried in 2022.

She began her broadcasting career in 1999 and has since climbed to become one of the most powerful figures in the contemporary media industry.

Delay, on the other hand, is still single and has yet to marry. Her followers were constantly pressing her to settle down, but she seemed unconcerned.

With rapper Amerado lurking at the door of her heart, Delay, at 40, is still single.

Sister Derby is a Ghanaian television presenter, musician, model, and academic who goes by the stage name Deborah Vanessa Owusu-Bonsu.

After her failed relationship with rapper Medikal, Sister Derby is yet to pick up the pieces of her love life.

As rumours surround her life and potential suitors, Sister Derby remains single in 2022.

Lydia Zynnell Zuh is a philanthropist and a Ghanaian fashion star. She is also an actor, writer, producer, and television personality.

Zynell has beautiful skin and a successful career in branding and acting, but she has yet to meet the right man to take her down the aisle.

Jessica Opare-Saforo is a Ghanaian television and radio personality, as well as a YouTuber.

Jessica has yet to find love and settle down, even after a 17-year career as a broadcaster with Citi FM and Citi TV, where she was the Programmes Manager.

Jessica is noted for having a fantastic voice, which she uses for voice-over work and vlogging. She is still single at the age of 41.

Lydia Forson is a Ghanaian actress, writer, and producer who has won numerous awards.

She recently explained why she chose to remain unmarried at the age of 37, despite the fact that she claims she is routinely approached by guys who want to marry her.

Lydia Forson has a fiery personality, but she prefers to be alone.

Sandra Ankobiah, despite having a successful acting career, is still single at the age of 38.

Although it was rumoured that she was dating Paedae of the R2Bees, the lawyer has yet to settle down.

Nana Aba Anamoah is a Ghanaian media personality, news anchor, and broadcaster who has won numerous awards. EIB Network’s General Manager is currently a mother of one.

She has stated that marriage is not for everyone, and she is still happily single at the age of 44.

Benedicta Gafah is a film producer and actress from Ghana. She rose to prominence as a result of her roles in various Kumawood and Ghallywood films.

The Zylofon Media signee and TV3 broadcaster is unmarried, despite the fact that she stands out and is the chosen choice of many guys.

Doreen Andoh, who has worked as a respected Ghanaian broadcaster for over 20 years, is still happily single in her late 40s.

Jackie Appiah is a Ghanaian actress who was born in Canada.

Jackie Appiah, who has won numerous honours and has a big following across Africa, is currently unmarried after divorcing her son’s father.

Martha Ankomah is a Ghanaian actress who also works as a businesswoman.

Martha Ankomah’s contagious beauty and smile are sure to attract the attention of many men, yet she is still happily unmarried at the age of 36.

She has recently been classified as a socialite and a political zealot.

Mzbel is a mother of one, but the “I Am Sixteen Years” singer is still happily single at 42.

Joselyn Dumas is a Ghanaian actress and television host.

Joselyn is a mother of one and was formerly linked to Joey Gucci, the CEO of Silhouette Advertising.

Joselyn Dumas is happily single at the age of 40 and with a great job.

Salma Mumin is a Ghanaian actress who has won numerous awards.

Despite denials that she is dating movie directors and producers Kofi Asamoah and Elikem Kumordzi, the actress is still single in her 30s.

Serwaa Amihere is a Ghanaian news anchor and broadcast journalist who presently works for GHOne TV.

She has long been a vocal opponent of the requirement that every woman marry. Serwaa has long maintained that marriage is not for everyone and is most likely a con.

Serwaa Amihere, who was rumoured to be dating the likes of King Promise, Joe Mettle, and others, is still single at the age of 30.

Yvonne Okro, who has had a very successful acting career and has won multiple honours, is currently unmarried at the age of 37.

Vera Hamenoo-Kpeda, commonly known as MzVee, is a musician from Ghana.

At age 30, Mzvee has expressed interest in settling down. She has spoken widely about her preference and what she expects her man to do.

While age might be a factor, Mzvee has intimated that she is not in rush to settle since “marrying late is better than marrying early and regretting it.”