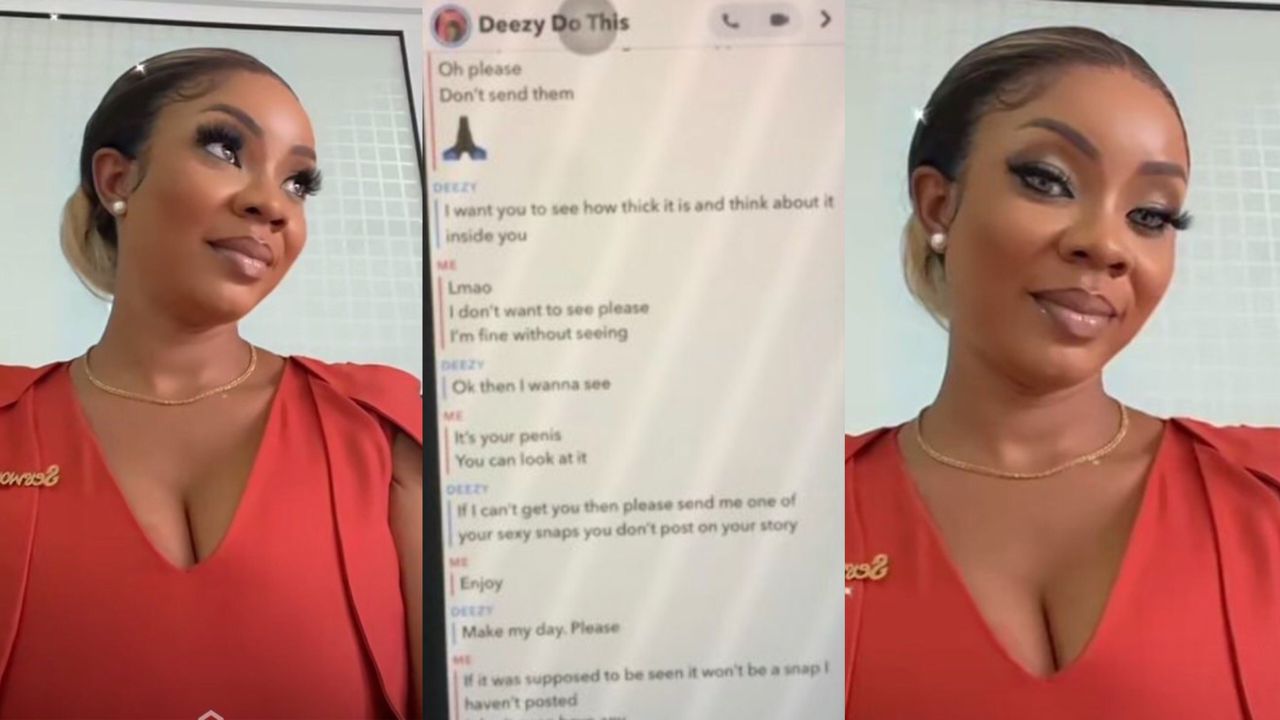 Heavy cosmetic-wearing Serwaaa Amihere hastily displayed her ignorance for the umpteenth time on a sensitive issue higher than her understanding.

Her name was featured hugely in the Twitter trends from yesterday to the early hours of today for a series of comments she made.

The guy identified as Deezy was ostensibly begging and pestering the lady for sex.

Kukuaa then shared screenshots of their conversation on Twitter, where she called out the gentleman for disturbing her peace. She was seeking online sympathy.

Serwaa Amihere hurriedly reacted to the posts shared by Kukuaa by asking her to delete them. According to her, it was not right for the lady to share the conversation on Twitter after entertaining the guy on Snapchat.

Serwaa Amihere argued that the conversation should have stayed in their DMs and not reshared on Twitter even in the face of the guy asking for sex.

The tweet by Serwaa Amihere incurred the wrath of netizens and especially feminists who believe the rights of women must be protected, Thus they expressed disappointment that Serwaa Amiher was not championing that.

But rather asking the young lady to keep mute about the unwanted online advances made toward her by the thirsty guy.

As a result, Serwaa Amihgere has been severally bearated. Check out some of the replies below…

@yaw_whyte wrote: Serwaa Amihere Dey resh pass. The inflated ego attached to her tweets is even funny; no one dares to criticize her, and if you do, she blocks you; which is to say, you’re disrespectful. And per their own HR rules, once you’re blocked, you deserve no job. Such are our celebs

ajay wrote: You Serwaa amihere even you you’re a journalist yet you don’t know why someone keeps records of sexual harassment. If that’s not madness idk what is

ajay wrote: You’re the type to ask why did she go to the man’s house aren’t you @Serwaa_Amihere so if she was on that your show you’d ask her why she wasn’t blocked, remind me what exactly your job description says?

ajay wrote: Not you using a stupid tweet to promote a space @Serwaa_Amihere people are trying to shed light on sensitive issues such as rape and harassment but you think the most important thing is to ask that very foolish question? Does blocking stop others from going through it?

ajay wrote: You Serwaa amihere even you you’re a journalist yet you don’t know why someone keeps records of sexual harassment. If that’s not madness idk what is

Serwa Amihere has since apologised for her indiscretion of subtly endorsing online sexual harassment.

She wrote: I had no idea there was a conversation on sexual harassment. My apologies to those affected

One thing about Serwaa Amihere is that she has a high self-opinion about who she is not. And she displays her ignorance on several issues on her show and on social media without shame.

I want to say a lot but…the least said the better.

Previous post Who is Andrew Tate? Biography of the controversial TikTok misogynist