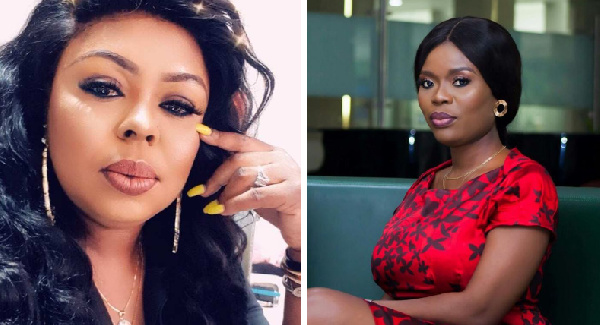 Delay has finally replied to Afia Schwar’s barren insults in a more savage and demeaning manner.

Recall that after Delay described Afia Schwar’s intelligence as the size of Shatta Bandle’s shoe, the comedienne took to the internet to mock her as a barren woman who has failed in life because of her childlessness.

These insults from Afia Schwar were fast condemned by a lot of social media users including Hon Sam George.

In a yet to be released episode on the Delay Show, the TV show host has stirred up the local digital space with an excerpt where she attacked Afia Schwar in a very ruthless manner.

According to Delay, she sees Afia Schwar just like a borla bird.

After showing the shades of birds with special emphasis on borla bird, Delay went on to heap accolades on herself saying that they are all kids before her.

Afia Schwar will definitely reply to this new shade from Delay and give a new dimension to tier ongoing beef.

Diamond Appiah also received stray bullets in this fresh attack from Delay because she joined forces with Afia Schwar to diss her on her IG page.